Giant Weapon Wielder (Ex) & Incredible Heft (Ex)
Modron can wield two-handed melee weapons intended for creatures one size category larger than himself, treating them as two-handed weapons. He takes an additional no penalty on attack rolls when using an over-sized two-handed weapon.

Unstoppable Momentum (Ex)
Modron has a +3 bonus on combat maneuver checks and to CMD while wielding a weapon sized for a creature of a larger size category. When wielding over-sized weapons, Modron can attempt to bull rush, drag, overrun, reposition, and trip creatures up to two sizes categories larger than himself.

Constant Vigilance (Su)
An arbiter gains a +4 bonus to recognize and disbelieve illusions created by creatures with the chaotic subtype or possessing the chaotic descriptor.

Smite Dishonorable Foe (Su)
Once per day as a swift action, a Modron can smite one creature that has acted dishonorably within the previous round by dealing sneak attack damage on the Modron or on one of his allies within 30 feet, by using the dirty trick combat maneuver, or by attacking a helpless foe within 30 feet of Modron (at the GM’s discretion, similar acts can qualify as dishonorable actions as well). When Modron smites, he adds his Charisma bonus (+7) as a bonus on attack rolls and his HD (16) as a bonus on damage rolls against the dishonorable foe. Once activated, this ability persists until the target is defeated or 24 hours have passed (whichever comes first).

Armor of Will (Su)
Modron’s powerful will generates a protective field of force that grants it an armor bonus equal to his Wisdom modifier.

Locate Inevitable (Su)
An arbiter can always sense the direction of the nearest non-arbiter inevitable on the plane, the better to help it report back to its superiors. It cannot sense the range to this inevitable.

Modron’s Sword
Modron’s Sword acts as (+2 Large Adamantine, Impervious, Growing, Protean Bane Greatsword) with the performance weapon quality which can be wielded by Modron alone as though it were a medium-sized weapon, whereas it acts large-sized for anyone else. Hardness 24; Hp 60

Former Captain of the Halcyon, an Axis ship of the Line. A bonafide Hero of his time. His ship and crew were shrunk and kept in a bottle by the Colorless Lord. Later freed by the crew and learned of his fall from grace. Itching to hunt down the Colorless Lord. Hired on as the Master of Arms.

His gravelly voice and tough guy demeanor inspires all to do their best. 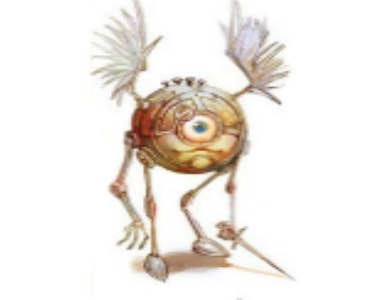